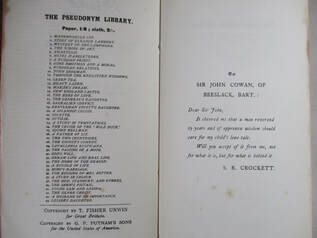 The PlayActress started life as a short serial 'The Great Preacher' in magazine form in the autumn of 1894.  J.M.Barrie took it with him on his honeymoon in the summer of 1894 hoping to turn it into a stage play (which never happened to the best of my knowledge) and it came out in novel form in November 1894 as part of T.Fisher Unwin's Autonymn Series.
The Dedication is intriguing:
Dedication    SIR JOHN COWAN, OF BEESLACK, BART.

Dear Sir John,
It cheered me that a man reverend by years and of approven wisdom should care for my childs love tale.
Will you accept of it from me, not for what it is, but for what is behind it.
S. R. CROCKETT.

‘Crockett was to rework the themes of 'The Playactress' more than once in his later writing.  In novels as diverse as  ‘Sandy’s Love’ and ‘The Moss Troopers’ we find the tensions between London and Galloway life to the fore.   ‘The Playactress’ is notable as his first foray into this world and from it we can see not just a vision of the harshness of urban life set against the simplicity of a rural existence, but much bigger tensions to do with love and family.
In ‘The Playactress’ Crockett shows that he is not one to shy away from difficult issues. He does not show the ‘evils’ of London in order to bolster a parochial view of the world or promote some rural idyll; he does so to expose social ills. 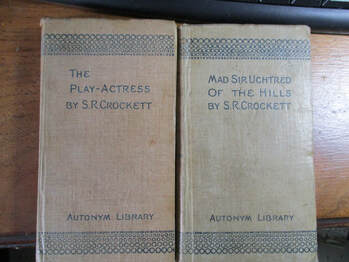 The original volumes (shown left) are hard to find, but you can read both 'Mad Sir Uchtred' and 'The PlayActress' in one volume (Galloway Collection 2014 edition) with new introductions.

Available at www.unco.scot as well as Amazon and other retailers. Be sure to ask for Volume 30 of the Galloway Collection edition.
Powered by