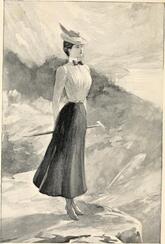 Originally commissioned in May 1896 by Hodder & Stoughton, this story is illustrative of a developing  ‘market’, and attests to Crockett’s versatility as well as his desire to fulfil publishers’ demands. It is important to take into account the contexts of publication if one is to truly understand Crockett’s career trajectory. He would have been writing Ione March some time between commission and the delivery date of December 1897, a time at which he had another six commissions underweigh.

His contracts in 1896 were as  follows: Little Anna Mark and The Silver Skull  in March and Ione March in May as well as The Black Douglas, notable for being commissioned a good year before Dracula was published, but it got caught up in the frenzy and was substantially altered to suit publishers' demands.
If we note that his contracts for 1897 are: Love Idylls in January, Kit Kennedy in March and  Joan of Sword Hand in May we get some idea of how busy he was during this time, juggling multiple stories.  He was a writer much in demand by both publishers and readers.

Ione March was first serialised between January and September 1898 in ‘Peoples’ Friend’ magazine. (As The Woman of Fortune). The following year Kit Kennedy was serialised over the same time frame for the same magazine. These are both character driven novels, which play to Crockett’s strengths but it’s interesting to contrast them as well as compare.  Along with The Black Douglas, they were both published in novel form in 1899. Thus it is possible to see the length and variety of 'life' for Crockett's stories.

One thing that even the least flattering of reviews notes straight away is that ‘Mr Crockett has shaken the dust of the Kailyard from his feet.’  A mere four years on from the first terming of the phrase, things (and fashions) have moved on.  Crockett is adapting to the marketplace he finds himself in.  His agent is doing his job, keeping him in the public eye and keeping him writing work that sells.

What’s  Ione March about? Well, you need to read it to find out. It opens in the Swiss Alps… that’s all I’m going to say.

While Galloway Raiders members can read some of the contemporary reviews,  at the Members Area, there’s nothing better than to read for yourself.  So why not take up the Slow Reading Project Challenge.  The first chapters of Ione March will be available at the Unco site from June 16th. HERE
Powered by