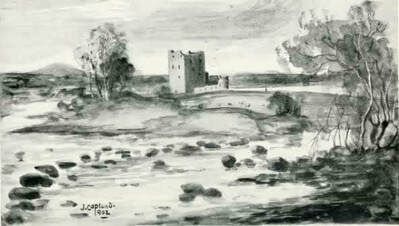 Crockett’s novel The Black Douglas was published by Smith,Elder in April 1899 (120 years ago this year) but ran as a serial in ‘Queen’ Magazine from July to December 1898.  The original story outline from 1897 covered both The Black Douglas and what became its sequel Maid Margaret (published 1905) but omitted the Gilles de Retz second half plot of the final published story where the action moves to France.

​ Bram Stoker’s Dracula was published in 1897 and it is possible that Crockett was encouraged to include his own similar supernatural elements  - including devil worship, were-wolves and drinking the blood of children - which took over the second half of the story.

Crockett was at the height of his popularity and working hard on a number of projects at this time. Archive records show that on in October 1897 the Crockett’s were in Stirling to tour Black Douglas ‘places’.   He was writing it through 1898 but also travelling abroad over the winter/spring of 1897/8. Having planned to go to Italy to finish work on The Silver Skull (which ran in ‘Pall Mall’ Magazine from August 1898 to May 1899) it seems he visited La Granja in Spain instead, to prepare for The Firebrand (commissioned 1899 and published 1901). Letters from St Andrews show that he was still ‘deep in The Black Douglas in June 1898 and he had not completely finished it by July of that year when it started serialisation.

The Black Douglas offers a picture not just of Scottish but also European medieval history, however the first  half of the story is perhaps most appealing to readers interested in Galloway and the history of the Douglas family.

It is set at Threave Castle in 1439 and features Laurence and Sholto McKim, who are the ordinary heroes tied up in the lives of the Sixth Earl of Douglas, William (the Black Douglas of the title). He early falls under the spell of Sybilla, the ‘white lady’ who many consider to be a witch.

Threave Castle is the perfect setting for a Gothic style story and Crockett certainly exploits it. The supernatural element, while ever present, is not simply gratuitous. Crockett shows that actions have consequences. We are not allowed to forget that it was a brutal and bloody period. The Douglas cry, ‘let dog eat dog. Wherefore should the lion care,’ comes back to haunt William.  The Douglas badge of arms, a bleeding heart in front of a Saltire, is a significant image which runs throughout the novel. The Douglas clan literally bleed for Scotland.

The story moves on beyond Threave to Stirling and Edinburgh, and onward to France,where the atrocities undertaken by arch villian Gilles de Retz in what Andrew Lang described as an example of the world-wide story ‘The Forgotten Chamber’  had contemporary reviewers observing that the story was not for the faint-hearted. One wrote:
‘The book contains much good fighting… but no one who has weak nerves should touch this volume.’

But I’ll leave you to decide that for yourself. If you are interested in the history of Threave, or the Douglas family, The Black Douglas and its sequel Maid Margaret are especially worth reading.  You can purchase them in paperback as Volumes 1 and 2 of The Galloway Collection from the Unco Online bookstore here The Black Douglas,  Maid Margaret. They are also available in paperback and digital versions from Amazon: just put the title and Galloway Collection in the search box to make sure you get the correct edition.