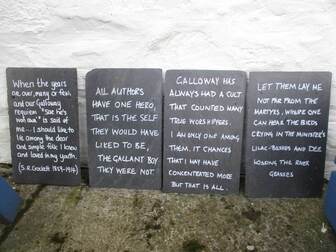 Since Crockett is the most quotable of writers, and since his love of the Galloway landscape rings through in his writing, a written tribute seemed appropriate. Thus:160 quotes for 160 years. Celebrating Crockett Country was devised.

'There is a huge slate, now deeply sunk in beech-wood, on which, when that beech was young, I used to sit swinging my legs into space and reading every book which I could beg, borrow or steal'.

Crockett understood that slates could be used in creative ways. We are all quite used to the concept of slates in the schoolroom. Crockett mentions them in many contexts as an integral part of his Galloway childhood. Romance was part of it… 'it was this very girl who thus saw the landscape waver and melt into a grey blur, like a sum on a boy's slate at close of school,' and 'It was all a dream. This tall young lady never swung her feet over a tree branch, sitting on a slate stool.' But Crockett's trademark Scots humour was also in evidence: ​

'I yince kenned o' a man that washed his face and neck—and him no used to it like. And’ (here the sheriff's officer lowered his voice and spoke very slowly and impressively) ‘that verra day a slate fell aff a roof and killed him dead on the spot!’
And
‘My mither says they gang to be drovers an' packmen, an' mak' sillar like slate stanes!’
So  #GoCrocketteering was born. The slates are still out there in the landscape for you to discover.